Customize your own Fes Desert Tours :

Below are some of our Fes Desert tours itineraries, they are able to be modified.

Morocco Tour Organizer provides the best offers to explore the city of Fes, experience its culture and go back in time to learn more about its history. Our Morocco Guided Tours to Fes provide accurate information about the city’s landmarks.
Fes city is seen as the cultural and spiritual capital of the country. Founded in the 8th century by Idris I, the city celebrated its 1200 birthday in 2008. Fes is divided into 3 sections, Fes El Bali, which is the old medina, Fes El Jadid, which was built in the 13th century, and the new Fes city built by the French during the period of French colonialism.

Fes can be called a city-museum, ancient Madrasas, architectural monuments of different dynasties are at every turn. Among the city’s numerous landmarks, let us present you some of the most important ones and a glimpse of their history.

Madrasa Bou Inania for instance is the most beautiful old school of the 14th century, which is an example of Islamic culture. The Madrasa is decorated with incredibly beautiful carvings, frescoes with Arabic calligraphy, a huge water clock and a stately minaret that serves as a Muslim religious school. A tour to Fes cannot be completed without a visit to the so-called world’s oldest university.

Al Qarawiyyine University is considered by the UNESCO and the Guinness Book of Records to be the oldest university in the globe. Historians say that the beginning of the establishment of the university was an educational institution for the Qarawiyyine Mosque, which was built by Mrs Fatima Al-Fihri The university and the mosque remained a center for science, culture and religious thought.

Serving as the entrance to the old medina, Bab Bou Jeloud is the famous blue-tinted white gate in the Moorish style, decorated with whimsical Arabic ornaments. Through them you can get to the medina, the ancient center of the city. The gate was installed in 1912 solely as a decorative element, and not as a defensive fortification; unlike all other gates operating in Fez.

Royal Palace is an architectural complex that covers an area of more than 80 hectares and consists of ancient mosques, madrassas, schools of Koranic study and a park with gardens. The palace was built in the 14th century, however, despite such an impressive date, it still functions as intended: the back of the palace is occupied by the current king of Morocco. The Royal Palace is one of the most ancient historical treasures in Fez. In addition to that, the colorful gates of the palace offer great opportunities for photography, especially when the light of the blue sky mixes with the brilliant colors of the palace and its golden doors.

In order to go back further into the past, you need to visit the Chaouara Tanneries. The place where the inhabitants still use the dyeing and processing of leather in ancient ways; tamping, drying, stretching and painting by hand with natural dyes. This use of ancient technologies has not stopped in this quarter for 1000 years, which makes it a unique place on the globe in its own way. Thanks to the tanneries, the leather products in the markets of Fes are distinguished by their high quality.

The era of the Saadian rule was marked by the construction of a number of towers that still stand tall to this day guarding the city of Fes. These towers had a very important military and security role, as they are defensive architectural edifices and indispensable fortresses to monitor everything small and large in the vicinity of the city. Among the towers built in the city, we mention the Borj Nord in the north of Fes, which overlooks the city of Fes from a high hill, giving its visitors a wonderful panoramic view. After independence, it was transformed into a museum of traditional weapons in 1963, and thus was the first museum specialized in the history of weapons in Morocco. 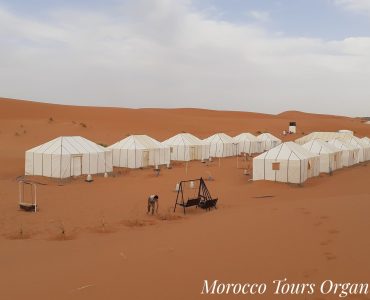 Book your 2 days trip from Fes to Merzouga. Thereafter, benefit from a camel ride on the dunes of Erg Chebbi and camping in Berber luxury camp. 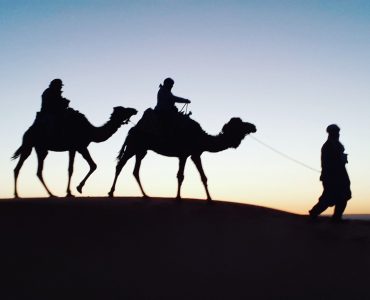 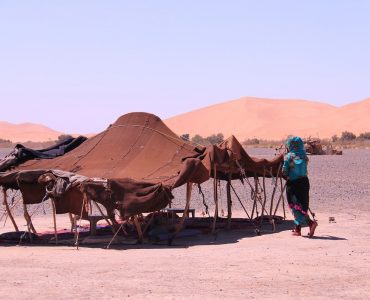 With our Fes tours, you will visit Azrou forest, the shelter of the atlas wild animals. For this reason, this became an attraction for tourists since the monkeys are around. The latters are friendly and used to people, they like to be fed and taken pictures of.

This would be the number one highlight of our tours. In fact, it’s a different experience when camel trekking across the Erg Chebbi dunes.

With our Desert Tours from Fes, You will experience an overnight in Merzouga luxury desert camp. Also, you will enjoy the Berbers playing on drums and dancing to the set-up fire.

Full day experience with our Merzouga Desert tour. We will visit Khamlia where dark skin people live, they will play gnawa music and entertain us. Moreover, we will visit the Berber nomads for overnight in the camp experience.

This attraction is for those who like hiking and rocky mountains. Therefore, with our Fes to Marrakech desert tours, you are able to get to this beautiful attraction. Also, you will discover how the power of water that could make it’s way through the 300m rocks.

With our tours from Fes, we will visit Ouarzazate, also called Ouallywood, a place where to visit one of the film studios. On the other hand, Ait Ben Haddou is one of best and most attracting sight for tourists. The latter is a Berber fortress and a stop for touaregs who trade kohl and salt.

Our drivers and guides are 100% natives. Thus, they will acompany you during your Fes trips and explain to you more about Morocco

The most visited attractions from Fes to Sahara are: Merzouga and it's Erg dunes. An overnight in Berber luxury camp with a camel trekking.

Multilingual drivers/guides. From English speaking to Spanish and French. You can book any guide recommended on our TripAdvisor.