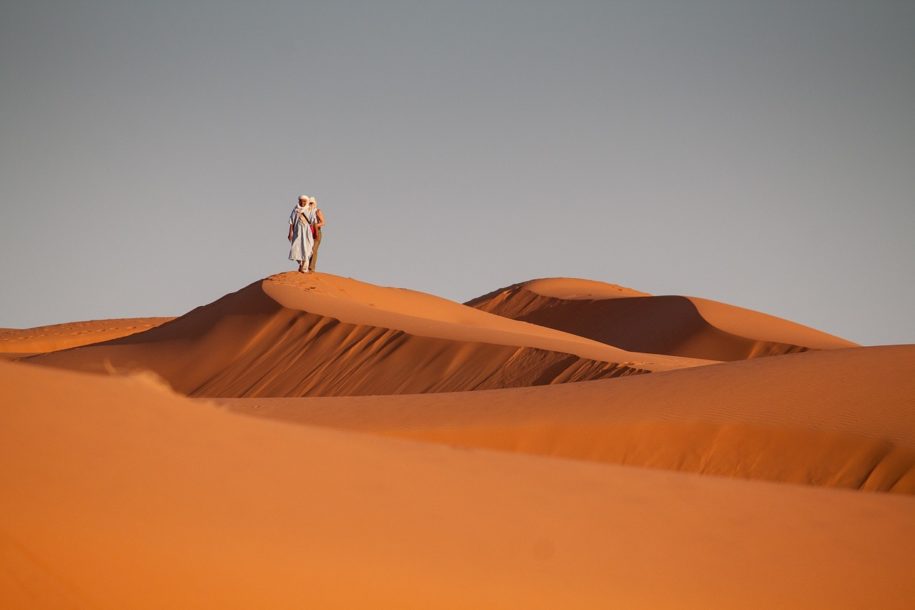 When you talk about hospitality, generosity, and kindness we must consider the Moroccan people as one of the people that share these values and traditions. However, Morocco is a country of diversity. A country with many cultures living together as one.
Above all, we can talk about two main Cultures, Berbers and Arabs. In general, they are two different cultures. But, regardless of the difference in Moroccan traditions and ways of clothing, they still live together in peace as one nation.

To get to know more About Moroccan people, traditions and ways of clothing, join our tours here.

Berbers are the indigenous people of Morocco and North Africa. No one knows exactly how long they have been living in this land, but some scientists say that they go back to prehistoric times, so nearly 300,000 years ago. Tamazgha or Numedia in the past is what they used to call their land that extends from the Canarian Islands to Siwa in Egypt. Yet, the Berbers like to call themselves ‘Imazighen’ which means free noble people.

In detail, these Moroccan people can be divided into three main parts with a little difference in dialects, traditions, and ways of clothing. In the North of Morocco, you find Riffians, their language is Tarifit. Moving to Souss valley and some parts of the Atlas mountains, there are Issoussien or Souassa. Their dialect is Tassoussiet or Shilha. Finally, we have Assamer Imazighen who live in the Southeast. These latter consist of many tribes. Most of their names start with the name ‘Ait’ such as Ait-khbach, Ait-Hdiddou, and Ait-Chghrouchn. These tribes have a bit different dialects but can understand each other.

Morocco’s official language is Arabic, thus it is seen as an Arab country by most people around the world. However, Arabs in Morocco came around the 17th country in order to convert Berbers to Islam. Imazighen took Islam as their religion and used Arabic is their language. Most of Berbers turned to be Arabs. Others, especially those who live in rural places kept their origin language.
Arab Moroccan people have a bit different Arabic that is different somehow from the standard Arabic. It is called Darija, and it differs too from each region. However, Moroccan Arabs have also some differences in traditions and ways of clothing

Clothing in Morocco as any other country has its own beauty. However, the tremendous diversity of Moroccan cultures and traditions reflects positively on the way that people dress and gives it way more diversity in clothing. In general, the famous Moroccan dress is surely the stunning Caftan. Many women dress it in important events such as weddings.

Yet, men dress differently. Djellaba is another famous Moroccan dress. Most of the men dress it all the time while others dress it only in important events.
Moroccan people dress in different ways!

In general, when we talk about Moroccan clothing we talk about two different ways, Berber and Arab.
Firstly, the Berbers dress in a special way. The Berber men usually wear Djellaba with Turbant as the main Male dress. Whereas, females wear Ahroy, a long dress that is made of Linen breach with a Hijab that covers their hair. Yet, upon the previous dress, some Berber women sometimes wear another colorful piece of linen that is called ‘Tahroyt’.

Arab women often wear Hijab as their main dress. It is a dress that covers the whole body except the eyes. This dress, in general, is rooted in the Islam religion.
While the Moroccan Arab men in clothing wear also djellaba, this latter is the thing that both cultures share in common.

Tags: Morocco clothing., Morocco people, Morocco traditions
Comments are closed.
Write to us.
Powered by
Hello! Welcome to Morocco Tours Organizer, how can we help you?