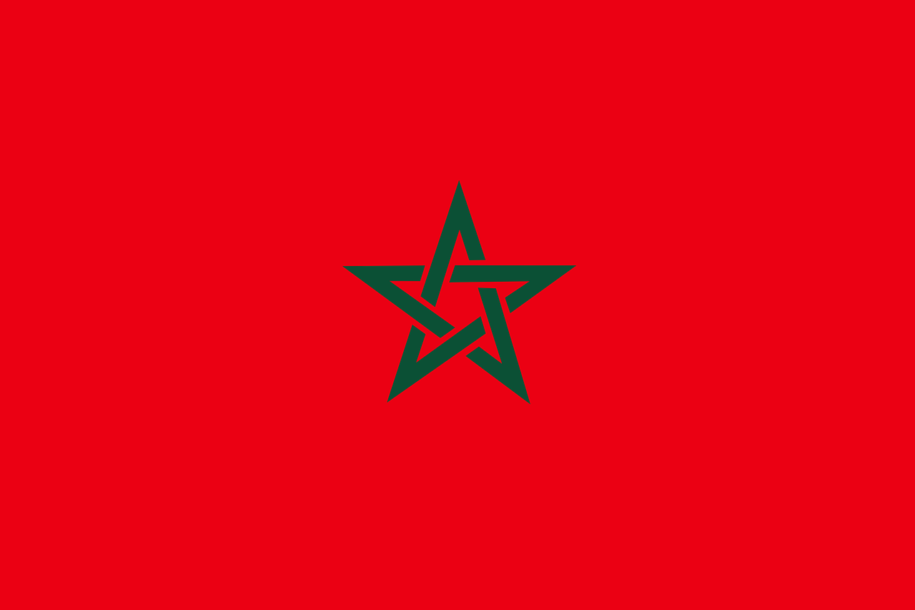 What to see in Morocco? It is no accident that Morocco is called the gateway to the Arab world, it is here that you can feel the real flavor of an oriental fairy tale: feel the spicy aromas of oriental spices, enjoy the taste of sugary natural sweets, admire the grandeur of sacred mosques.

It is no accident that Morocco is called the gateway to the Arab world, it is here that you can feel the real flavor of an oriental fairy tale: feel the spicy aromas of oriental spices, enjoy the taste of sugary natural sweets, admire the grandeur of sacred mosques. Although the country was ruled by Europeans for a long time, many architectural buildings in the original oriental style have been preserved on its territory. We offer you to get acquainted with the main ones by taking an interesting walk into the past, where among the date palms the snow-white walls of the palaces of viziers and sultans rise, the blue waters of the pools for their wives and concubines glisten, rose bushes and orange trees bloom. What to see in Morocco.. 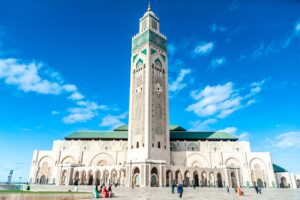 . This is a relatively new structure, opened to the public in 1993. Despite its young age, the Hassan II Mosque is the main attraction of Casablanca. If you are in this city, even if you are passing through, and you have a dilemma of what to see in MoroccoWe highly recommend this attraction. It is no coincidence that the construction bears the name of the former king, because it was he who laid the first stone in its foundation. The location of the mosque is also noteworthy – it is located on a cliff above the Atlantic Ocean. At high tide, it seems as if the stone building plows the ocean. The minaret is 210 meters high. In clear weather, its dome moves apart. For worshipers, the floor in the room is heated, and the laser beam points towards Mecca. The floors are made of marble slabs, the walls are lined with mosaics, the halls are decorated with carvings and stone columns. 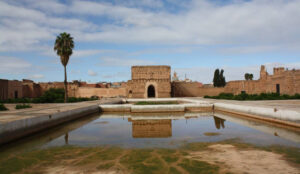 The example of Maghreb architecture in Marrakesh is in a deplorable state today. Its spacious pools are overgrown with orange trees, and the once luxurious halls are ruthlessly plundered. At the beginning of the 17th century, the complex was called golden, since most of the interior decoration was made of pure gold. The building was designed by the best architects of Catalonia and Andalusia. Its interior decoration conquered with chic and brilliance: rare types of marble, precious woods, Indian onyx and Irish granite enchanted everyone who was lucky enough to visit El Badi. After the residence of the Sultan was moved to Maknes, the architectural masterpiece began to fall into disrepair. 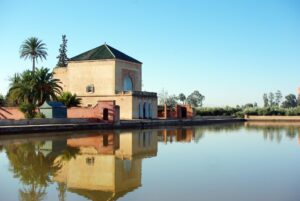 The gardens on the outskirts of Marrakech were laid out in the 12th century for acclimatization, cultivation and cultivation of various types of plants. To irrigate the trees, artificial ponds were dug, filled with melt water from the Atlas Mountains. Today, palm trees, olives and orange trees mainly grow on a vast territory. There is a legend that the Sultan himself liked to spend time in the man-made oasis. He drank and ate with the concubines, and in the morning the bodies of the women ended up in the pond. According to the story, the bottom of the reservoir is littered with many skeletons. According to another legend, the treasures of the Sultan, looted during military campaigns, are hidden in the gardens of Menara. Today, the attraction is a place of romantic meetings, a center for city events and sports. Don’t know what to see in Moroccoabsolutely free? Experience a heavenly oasis near Marrakech Airport. 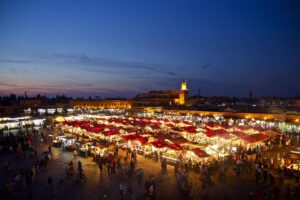 Part of the medina during the day is no different from other squares: its vast space is given over to the burning Moroccan sun, where merchants selling refreshing drinks, fruits and coffee huddle. But after sunset, the square comes alive. Cobra tamers come out into the street, sword swallowers, acrobats, gnaua dancers give performances, scorpion fights are arranged. In addition to spectacles, onlookers are also offered “bread”: the smell of meat cooked on coals, coffee and real Moroccan tea is in the air. There are no empty seats on the illuminated terraces of taverns – tourists feast on inexpensive oriental dishes, watching what is happening on the square. 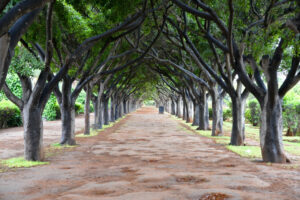 An ideal place in the center of Casablanca to relax between excursions. The park abounds in exoticism: neatly trimmed fan palms combined with emerald lawns and wide gravel alleys create an atmosphere of tranquility. French masters were engaged in landscape design here. At the beginning of the 20th century, they erected the snow-white Sacré-Coeur Catholic Cathedral in the park. In addition to aesthetic pleasure, it is also possible to get gastronomic pleasure here: many restaurants and cafes invite you to stop by for lunch. The prices in the establishments are quite democratic, and the portions are huge. It costs nothing for romantics to sit comfortably on the lawn with a snack cooked at home or bought in a street stall. 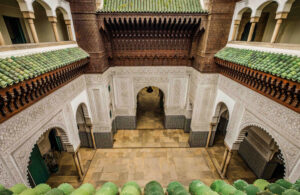 In the middle of the 20th century, Casablanca began to strengthen its role as the main port of the country. As a result, the city’s population has grown rapidly. An urgent need prompted the government to erect a majestic building with 60 chambers, combining the best traditions of French and Oriental architecture. The central reception hall is crowned with a glass dome, which rests on a carved wooden base. The walls are lined with Moroccan ceramic tiles, and the arches are decorated with the finest carvings. Forged chandeliers with stained glass windows are a good addition to a luxurious interior. At the entrance to the mansions there are red forged gates, which are distinguished by excellent inlay. 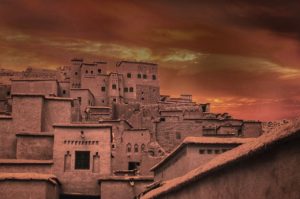 The settlement, 32 km from the city of Ouarzazate, attracts fans of a rich “excursion”. The fortress of the same name located on its territory once served as a haven for caravans traveling across the Sahara. Today the traditional caravanserai is loved by Hollywood directors who shoot scenes from the Old Testament and Egyptian sketches here. Thanks to their interest, the fortress is regularly restored, and the date gardens located in its vicinity are kept in perfect condition. Once in the city, it seems as if you are in the 11th century or beyond reality. The windows of modern hotels offer breathtaking views of the fortress. 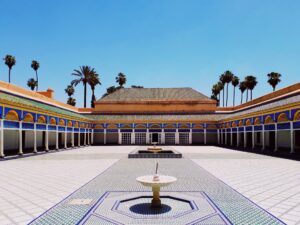 One of the main attractions of Marrakesh was built in 1880 by order of the Grand Vizier Sidi Moussa for one of the wives of the harem. In translation, the name of the building is translated as “Beauty’s Palace”. The husband in love spared neither time nor money for its interior, and soon the project surpassed all the richest and most beautiful buildings in Morocco. In addition to one of the four wives, 24 concubines and servants settled in the dwelling. As the number of women increased, additional rooms were added to the palace mansion. In order not to attract envious glances, the facade of the palace is absolutely ordinary. But from the inside, it resembles a precious box, where marble shimmers, picturesque frescoes, fine mosaics, sapphires and gold. The wealth of the vizier was envied by the sultan himself, who gave the order to plunder the possessions after the death of the owner. 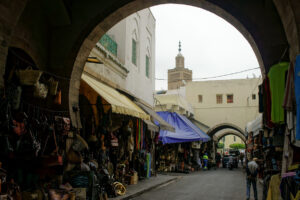 It is located on the territory of the New Medina, founded by the French at the beginning of the 20th century on the outskirts of Casablanca. Here, European and Oriental architecture are intertwined in a bizarre way. Compared to the Old Medina, where the streets are unusually narrow, the New Medina has all the conditions for convenient transportation, there are sidewalks and shady alleys. Despite the French influence, the market in the Habus quarter is primordially oriental – noisy traders invite buyers to the fish rows, invite them to choose something from Moroccan spices or buy souvenirs made of ceramics and leather.

Endless dunes with lost rare oases are combined with exotic fortresses of past eras, built at that wonderful time, when the region was still buried in greenery, was saturated with river waters and irrigated with rains. Today, only hot sands remain here, which can really be overcome on a camel or driving a jeep. The Draa Valley enjoys particular tourist popularity in Morocco, where among the oases there are Berber settlements, the ruins of the Kasbah forts can be seen.

We offer you the best holiday in Morocco with experience What to see in Morocco?
Read more